En
Ру
Biography
Press
Contacts
Videos
Narek Hakhnazaryan
DOWNLOAD PRESS-KIT
Since winning the Cello First Prize and Gold Medal at the XIV International Tchaikovsky Competition in 2011 at the age of 22, Narek Hakhnazaryan has performed with most major orchestras and in recital and chamber music across the globe at many of the world's most prestigious festivals. Hakhnazaryan is a compelling artist, a true virtuoso with an innate musicality and an exceptional talent for connecting with his audience. He has been described as 'dazzlingly brilliant' (The Strad) and 'nothing short of magnificent' (San Francisco Chronicle), and of his LAPO debut, the LA Times said 'His command of the instrument is extraordinary'.

'His command of the instrument is extraordinary" - LA Times
Highlights of Narek's 2022/23 season include a "star-studded" performance at the Concertgebouw in Amsterdam as a part of the Quartet with Nikolai Lugansky, Nikita Boriso-Glebsky, and Maxim Rysanov; a Spanish tour with Barcelona Symphony Orchestra and the renowned conductor Juanjo Mena; more performances in Spain, this time around featuring Asturia Quartet; performances at the Konzerthaus Dortmund in Germany and Cadogan Hall in London, England. More than that, Hakhnazaryan is set to tour California with concerts in San Diego, Sacramento, and Fresno. Also, this season brought Narek a residency at the Wiener Konzerthaus — he presented a chamber music subscription as a part of a trio with Nikita Boriso-Glebsky and Georgy Tchaidze.

Hakhnazaryan has enjoyed a truly global career since his rise to fame in 2011 and has played with orchestras such as the Orchestre de Paris, London Symphony, London Philharmonic, Rotterdam Philharmonic, Frankfurt Radio, Berlin Konzerthaus, Royal Stockholm Philharmonic, Chicago Symphony, LA Philharmonic, Pittsburgh Symphony, Sydney Symphony, Seoul Philharmonic, NHK Symphony orchestras, and with conductors such as Gergiev, Koopman, Alsop, Lintu, Sokhiev, Robertson, Honeck, Noseda and Netopil. He has toured Spain with the WDR Symphony/Saraste, the US with the Estonian National Symphony Orchestra/Neemi Järvi and Japan with the Czech Philharmonic/Bělohlávek. A former BBC New Generation Artist, he has performed with all the BBC orchestras and made a sensational debut at the BBC Proms. In 2017, the Vienna Konzerthaus invited Hakhnazaryan to be a "Great Talent" and during the two seasons that followed he performed there regularly in recital, chamber music and with orchestra, most notably with the Vienna Symphony and Hrůša.

biography
Narek Hakhnazaryan was born in Yerevan, Armenia, into a family of musicians: his father is a violinist, his mother a pianist, and he performs regularly with his brother, the conductor Tigran Hakhnazarian. 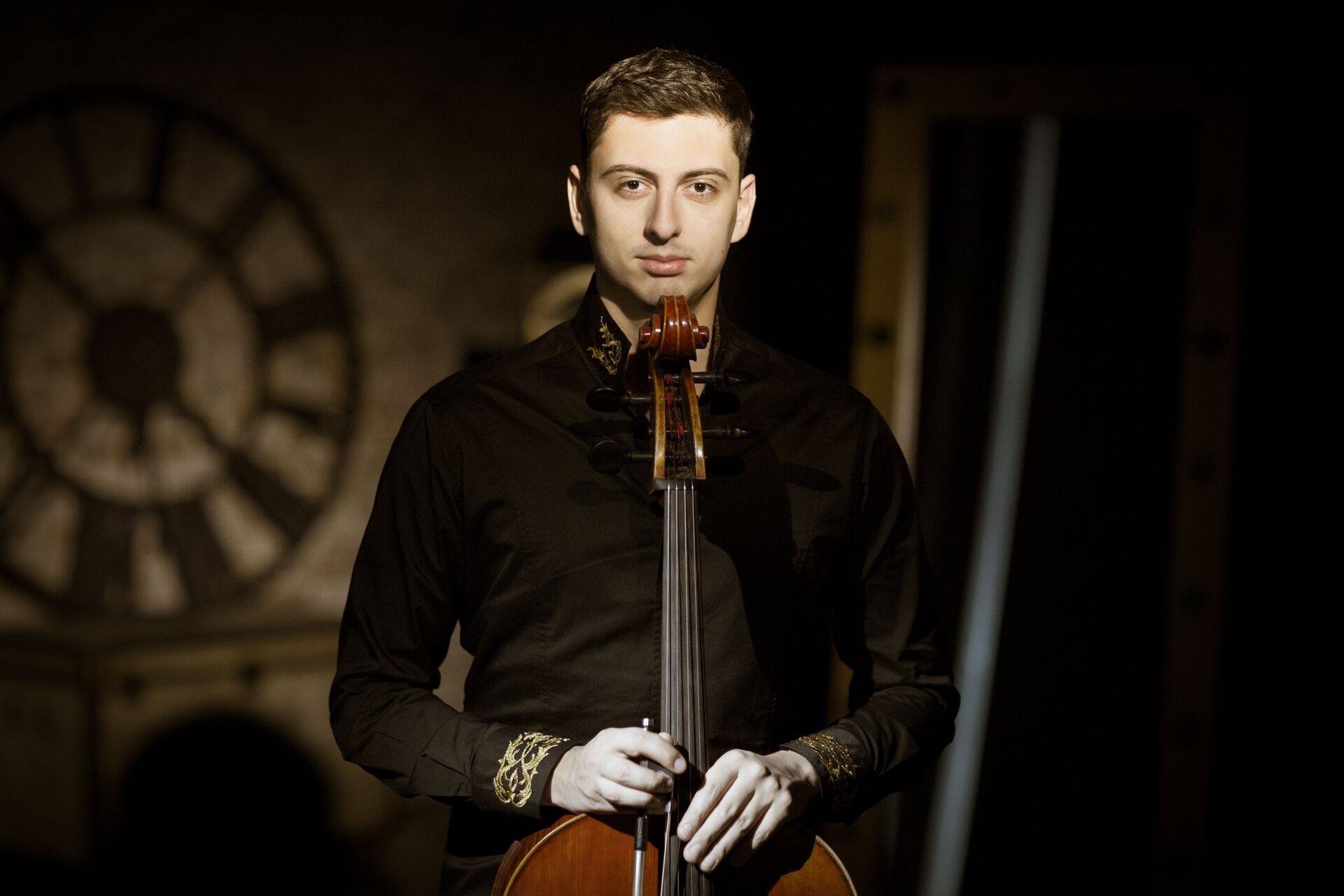 In September 2017 he was awarded the title of "Honored Artist of Armenia" by the President of Armenia Serzh Sargsyan. Hakhnazaryan plays the 1707 Joseph Guarneri cello and F.X. Tourte and Benoit Rolland bows.

In 2017 he toured southeast Asia, performing the complete Bach cello solo suites in Taipei, Seoul, Tokyo and Kyoto. An eager chamber musician, Hakhnazaryan has performed at most major festivals worldwide and in major halls across Europe with various chamber partners. With the ZEN Trio, he has toured the US and China, has released a recording on Deutsche Grammophon and upcoming plans include concerts in London and Barcelona.
In summer of 2019 he performed in recital at the Verbier and Rheingau Festivals with Daniil Trifonov, and in the 18/19 season was enjoyed a 4-concert residency at London's Wigmore Hall. In North America he performs regularly in recital, most recently in New York City, Chicago, San Francisco and Toronto and in past seasons has performed at Carnegie Hall and Jordan Hall (Boston).
The 2020/21 season brought Narek a debut with the Vienna Radio Orchestra, a performance with the Barcelona Symphony Orchestra at their Madrid residency, Staatskapelle Weimar, and a residency with the Finnish Radio Symphony. He toured Germany with Trifonov and Dogadin, and in various chamber combinations with artists such as Lugansky and Debargues. He performed at the major venues across Europe including the Amsterdam Concertgebouw, Wigmore, Cologne Philharmonie and Madrid Auditorio. He performed together with Daniil Trifonov in the USA, including Carnegie Hall.

Mentored by the late Rostropovich, Hakhnazaryan received an Artist Diploma from the New England Conservatory of Music in 2011 where he studied with Lawrence Lesser. Prior to this he studied at the Moscow Conservatory with Alexey Seleznyov and at the Sayat-Nova School of Music in Yerevan with Zareh Sarkisyan. Hakhnazaryan has received scholarships from the Rostropovich Foundation and the New Names Foundation, and his prizes include First Prize in the 2006 Aram Khachaturian International Competition in Armenia and First Place in the 2006 Johansen International Competition for Young String Players. As First Prize winner in the 2008 Young Concert Artists International Auditions, Hakhnazaryan made his debut in Washington, DC and at Carnegie Hall.
videos
https://www.youtube.com/watch?v=FUS0BCWPjpg; Narek Hakhnazaryan – Edward Elgar Concert for Cello and Orchestra für Violoncello und Orchester op. 85; 39:33; https://www.youtube.com/watch?v=-6BJ2XyIAMg; Narek Hakhnazaryan – Eduard Baghdasaryan: Nocturne for Cello and Orchestra, Alexander Arutiunian: Impromptu for Cello and Orchestra; 9:15; https://www.youtube.com/watch?v=t923hLJXMv0; Narek Hakhnazaryan plays Tchaikovsky – Variations on a Rococo Theme for cello and orchestra; 38:02;
press
The concert's highlights came in the shape of Armenian cellist Narek Hakhnazaryan's technically impeccable and distinctively personal account of Haydn's First Cello Concerto
(The Guardian)
«Love towards football helped me become the cellist in many ways"
(Armenia Sputnik)
«Love towards football helped me become the cellist in many ways"
(Armenia Sputnik)
contacts
...
...
Booking manager
Alina Koyshibaeva
+79060363031
+32494917700
a.s.koyshibaeva@gmail.com
alina@larusmusic.com