En
Ру
Biography
Calendar
Press
Discography
Contacts
DOWNLOAD PRESS-KIT
Videos
Ekaterina Mechetina
Ekaterina
Mechetina
'Even yesterday one could have said that Romanticism was dead. But listening to Mechetina (and some other young "obstinate people"), it would appear that Romanticism is alive... Mechetina washes away preconceived views and brings us a fresh perception. It would appear that she is less interested in the passion and power of Chopin's passions than their brilliant inner artistry...' – Evening Odessa
biography
Ekaterina Mechetina was born in a family of musicians. From the age of four she studied music. Graduated from the Central School of Music of the Moscow Conservatoire (class of Tamara Koloss), the Moscow Conservatoire (class of Vladimir Ovchinnikov) and completed a post-graduate study at the conservatoire (class of Sergei Dorensky). Gave her first recital at the age of ten, and two years later undertook a concert tour of Japan. Since then she has appeared in over thirty countries on all continents other than Australia.
Has taken part in such major international festivals as Sviatoslav Richter's December Nights in Moscow, the Dubrovnik Festival (Croatia), the Crescendo festival in Moscow, St Petersburg, Yekaterinburg, Pskov, Tyumen, Paris and Riga. Since 2003 she has taken part in the international music project Russian Muses for the World. Has recorded on radio and TV in Russia, the USA, Italy, Japan, Brazil and Kuwait. In 2005 on the Belgian label Fuga Libera the pianist released her first disc of recordings of works by Rachmaninoff. Recipient of the Triumph prize, the prize of the foundation Russian Muses for the World, the prize of the Ministry of Foreign Affairs of the Russian Federation "For establishing a positive image of Russia in the world arena", the Prize of the President of Russia for Young Representatives of Culture (2010) and member of the Council of the President of the Russian Federation for Culture and the Arts. Since 2009 she has taught at the Moscow Conservatoire (assistant to Alexander Mndoyants).
Gives some seventy recitals each year and performs at world-renowned venues including the Bolshoi, Small and Rachmaninoff Halls of the Moscow Conservatoire, the Moscow House of Music, the Tchaikovsky Concert Hall, Amsterdam's Concertgebouw, the Casals Hall in Tokyo, Berlin's Konzerthaus, the Théâtre des Champs-Élysées and the Salle Gaveau in Paris, the Milan Conservatory and the Alice Tully Hall in New York.
At the age of ten she won the Grand Prix at the Mozart Prize competition in Verona, where her main award was a Yamaha piano, and at the age of thirteen she was awarded 2nd prize and the special prize "For artistry and charm" at the Moscow International Frédéric Chopin Young Pianists' Competition. At the age of sixteen she became the youngest prize-winner of the International Ferruccio Busoni competition in Bolzano. At that competition, in addition to being a prize-winner, Mechetina received the prize for the best performance of a work by Liszt's etude Feux follets. Has also been a prize-winner at competitions in Epinal (2nd prize, 1999), the Viotti Competition in Vercelli (2nd prize, 2002), in Pinerolo (1st prize, 2003) and the World Piano Competition in Cincinnati (1st prize and Gold Medal, 2004).
Has worked frequently with Mstislav Rostropovich, Vladimir Spivakov and Shchedrin, whose new works she has presented in Moscow and Amsterdam. The pianist's repertoire includes over forty-five piano concerti, many of which have been performed under such renowned conductors as Vladimir Spivakov, Mstislav Rostropovich, Saulius Sondeckis, Yuri Simonov, Pavel Kogan, Dmitry Sitkovetsky, Alexander Sladkovsky and Alexander Skulsky. Collaborates with vivid young performers including Nikita Borisoglebsky, Sergei Antonov, Boris Andrianov and Alexei Ogrintchouk. 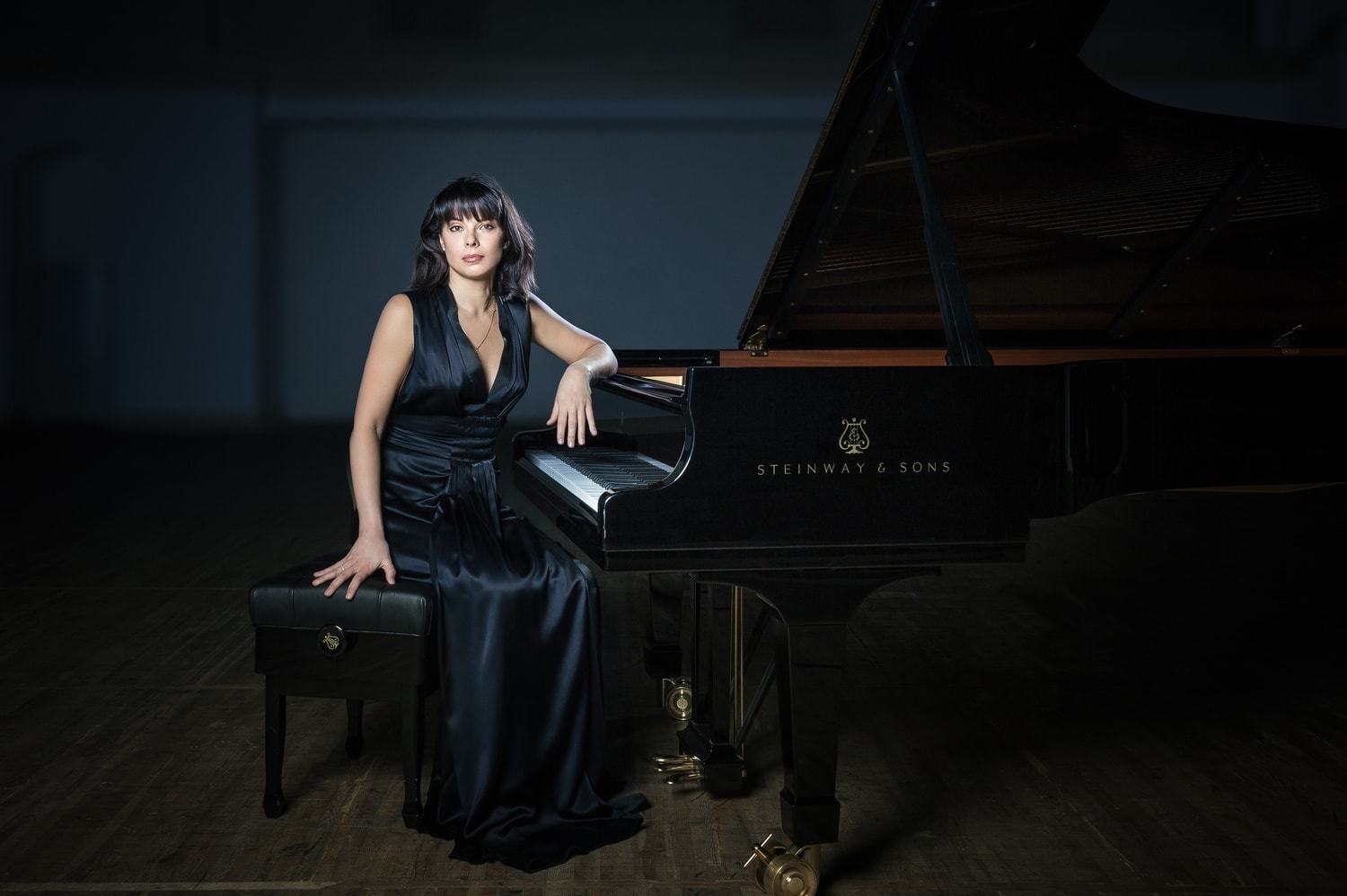 calendar
SEE FULL SCHEDULE
videos
Rachmaninoff - Piano Concerto No.2
Ekaterina Mechetina - Recital at Moscow Conservatory
press
"Mechetina is a brilliant pianist, her performances are bold and confident, as you would expect from the Russian
piano school."
(The Boston Globe)

"Mechetina is a brilliant pianist, her performances are bold and confident, as you would expect from the Russian
piano school."
(The Boston Globe)
"In my opinion Yekaterina is a staggeringly vivid and dazzling talent! Over eight days she learned two of my most complex works. Other than compliments I had nothing to say to her. After she performed the whole programme the audience stood up and gave her an ovation. Quite simply, she's a miracle! A sensation!"
(Rodion Shchedrin)
discography
Rachmaninov: Variations on a Theme of Corelli, Piano Transcriptions (2005)
Rodion Schedrin Tolibkhon Shakhidi Ekaterina Mechetina (Piano) (2008)
Ekaterina Mechetina Plays Tchaikovsky, Rachmaninov & Mussorgsky (2013)
What Dreams May Come (2018)
contacts
Booking manager
Alina Koyshibaeva
+79060363031
+32494917700
a.s.koyshibaeva@gmail.com
alina@larusmusic.com
Assistant manager
Julia Krylova
+79160564568
julia4moscow@gmail.com
julia@larusmusic.com
Larus – classical music agency
Larus – classical music agency
Back to top